The Musings of a Dreamer

Check out on Goodreads | Buy on Amazon
Genre: Contemporary Romance | Second-Chance Romance
Read Count: 3 times
My Rating: 3.8 stars!
Description: No connections. Play it safe. These were the rules Ivey lived her life by.
Until she hit Mustang, Colorado, a perfectly imperfect town where the citizens were welcoming and one of them included the tall, beautiful, macho man rancher cowboy, Grayson Cody.
On the run for a decade, Ivey knew she was supposed to play it safe. But she was tired of being on the run. She wanted a normal. She wanted real. She wanted a home.
And she wanted Grayson Cody.
And Grayson Cody wanted Ivey.
No one who looked at them couldn’t see they belonged together. There was one man in this world for Ivey and one woman in this world for Grayson Cody.
So they fell in love.
But just as quickly as they fell together, they were betrayed and torn apart. Separated for years, Ivey was certain her life would not include her rancher cowboy. Until the town of Mustang reached out to her when Gray was in trouble. Even though she thought he broke her heart, she charged in to help. Then Gray and Ivey discovered they were betrayed and, not only that, Gray had an enemy who would stop at nothing to defeat him.

Waaaaaaay back in sixth-grade, little ole me discovered adult romance books. A bit young, okay, but I immediately fell in love with this new world of romance. My first book? Well, that was The Gamble, another book by Kristen Ashley. Over seven years later, and she’s still one of my favorite authors. I reread several of her books each year, and it’s become a tradition to reread at least one from her large backlist each month.

Kristen Ashley’s books are the ultimate romance comfort food, and this book is more so than most, very much like a warm hug. Her books are always long, including this one, and yes, you could probably cut the book in half and not really damage the plot. But, that would most definitely ruin the magic she weaves between those pages, as she builds this amazing connection with and between her characters. By the end of the book, the characters are fleshed out in a way that’s rare for the genre and you’re in love.

In the interest of being completely honest, this is not my favorite KA book by a long shot. She has, like, a million of them out, so that’s not a shockingly negative statement. I always enjoy Play it Safe and will certainly reread it many more times to come, but it’s the most laid-back romance in her reportoire, not particularly fast-paced or action-packed, which is what makes it not quite my favorite. But still plenty enjoyable :)

“You still fallin’ in love with me?”
I stared, my cheeks now getting warm and opened my mouth to answer affirmative when he went on.
“’Cause you should know, baby, I’m already gone for you.”

In Play it Safe, we have 22-year-old Ivey, who ran away from home at fourteen with her older brother when things at home escalated dangerously. They’ve made their way around the country hundreds of times on a wish and a prayer, surviving on the cash Ivey makes a hustling pool. One night, they land in Mustang, Colorado, a very small town named after the wild mustangs that used to be tamed in the town. After her brother (who’s not really a good person) convinces Ivey to stay in town for a few weeks (he thinks he found love! Aww), she meets rancher cowboy Grayson Cody and they fall in love. But become betrayed and separated for seven years.

Ivey’s story was very interesting in this one, because we got to see her grow. The story evolves over three phases in her life: when she meets Gray at 22, in the in-between stage where she makes a life for herself after they were betrayed, and then when they get their second-chance. It’s a big leap, the shy, but hopeful, girl who had never cooked in a kitchen at 22, to the more hardened (but not really, she is still a KA heroine, after all) ex-showgirl woman who grew into her backbone and didn’t hesitate to meet Gray toe-to-toe when they disagreed.

Play it Safe isn’t a romantic suspense, like most of KA’s novels, and while there are roadblocks in the story (obviously, or it would be excruciatingly boring!), it’s more of a character-driven emotional journey. We see Ivey, who, for the first time in her life, dreams of putting down roots and living, and her growth after that, was inspiring. The two had an instant connection as soon as they met, but clearly grew over time. The steaminess, the playfulness, perfect alpha-man Gray, the warm story-telling… it had all the elements I love in my romances, and it was a clear success. I laughed, cried, giggled and toe-curled right along with the characters. It’s a Kristen Ashley book so… I loved it ✨

Other romances you may enjoy by this author… 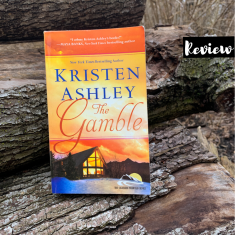 Have you read a Kristen Ashley book? What are some of your favorite second-chance romances? Let me know in the comments below, I’d love to hear from you!