Check out on Goodreads | Buy on Amazon
Genre: Contemporary Romance | Military |
Epistolary Romance | Friends-to-Lovers
Source: Kindle Unlimited
Motivation: Post Office square in Romance-opoly
My Rating: 4.5 stars!
Description: Ruby Santos knew exactly what she was getting herself into when she signed up to write a soldier overseas.
The guidelines were simple: one letter or email a week for the length of his or her deployment. Care packages were optional.
Been there, done that. She thought she knew what to expect.
What she didn’t count on was falling in love with the guy.
An Amazon Top 10 Best Seller

I read this one to fulfill the Post Office square in Romance-opoly (see my progress here).

God…fucking…dammit! This one was so good! It’s only a few days into the month and let me say, March is not messing around. I’ve had more five-star reads in the past week than all of last year! Already!! Gosh. Anyway, I’ve heard people worship and praise Mariana Zapata, and I’m sooo glad I’ve finally had the chance to read one of her stories! Because she gets praise for a good reason.

The premise for this one is simple: Ruby writes a letter or email (around once a week) to a soldier stationed abroad for the length of his deployment. That’s it, that’s the story. It was crafted perfectly. The first half of the book is all of Aaron and Ruby’s letters/emails/IMs/various methods of correspondence. There were no normal scenes/dialogue at all during those scenes – but I didn’t miss it one bit. I was supposed to go bed early on the night I started this one, and low and behold, I looked up and it was 2 a.m. This may be one of my favorite epistolary romance’s I’ve read to date, and I don’t say that lightly.

The characterization may have been done solely through correspondence, but Ms. Zapata gave such a clear view of each of the characters personalities. Somehow, their emotions shone through and we could tell when Aaron was upset but trying to hide it at the prospect of Ruby dating, and once it did switch to dialogue, it made perfect sense to me. I actually had to pause for a moment and think it odd to myself that the transition happened to seamlessly that I almost missed it. I’d just read the first real scene, and I had such a distinct view of the character’s voice and personality, even if it was through messages. It was exceptionally well done on Ms. Zapata’s part, and I loved the multi-media aspect.

“I was a goner from the first time you gave me hell.” Aaron smiled.
“Maybe even before then.”

The main character, Ruby, was amazingly fun. She was dorky, passionate, kinda anxious, sweet and very hilarious. She speaks her mind, and it never failed to wring a smile from me or Aaron. After the messaging, the actual scenes were told from her perspective and done so freaking well. When she was waiting at the airport to meet Aaron for the first time, my stomach was a huge ball of nerves! He called her and I gasped aloud, causing my roommate to turn over and check that I was okay (“All good, thanks!”).

Aaron was just great. He’s a gentle one, but also has a wicked sense of teasing humor. He’s very sweet, easygoing and patient with Ruby. She’s definitely the more outgoing of the two, and he’s just quietly amused by her antics, which is one of my FAVORITE things to see him my heroes. He really takes care of her, and doesn’t hide his emotions, which I found refreshing. He was just as anxious to meet his pen-pal-turned-best-friend as she was to meet him, and he didn’t hide it. I was an anxious mess for both of them! He exuded such a tender warmth throughout the scenes, it’s impossible not to fall in love with him.

By far the best part, however, was their connection. Since we had access to all of their correspondence, we really get to see their relationship being built from the ground-up, and watching them evolve from strangers to steadfast friends (with respective secret crushes) was inspiring. The friends-to-lovers trope is one of my favorites for a reason, because there’s a strong foundation for the romance to stand on. They already knew everything about each other due to their friendship – even if they had no idea what the other looked or sounded like. Their first meeting… I still have chills from the tender anxiety they were feeling. This was a slow-burn romance to the max, and although the correspondence section of this book was lengthy, I don’t think this book would have been what it was without them. Now, I have a hankering to find myself a military pen pal, not gonna lie… (Check out other reviews of Kindle Unlimited books)

Other Kindle Unlimited Reads you may enjoy… 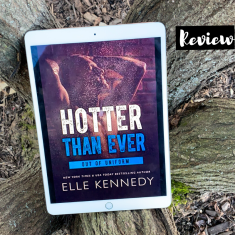 Have you read a Mariana Zapata book before? What’s your favorite epistolary romance story? I’m always looking for rec’s! Let me know in the comments below, I’d love to hear from you!