Check out on Goodreads | Shop on Amazon
Genre: Adult | Contemporary Romance | Romantic Suspense
Series: The Line #1
My Rating: 2 stars!
Release Date: July 17th, 2018
Source: Enticing Journey Promotions
Description: He’s a killer able to reach even the most untouchable marks and she’s his new obsession.
Watching her from his balcony, Hunter can’t fight the force pulling him toward the girl who just moved in across the street. But, when the police take her away, he has no choice but to follow.
All Addy wanted was a new beginning and a chance at a normal life after leaving her cheating ex. But, after she witnesses a brutal crime, she’s forced to relocate while the police investigate. It’s not exactly the start she was hoping for. When she finally meets Hunter, her world is turned upside down. Addy begins to question what normal even means while realizing her happy-ever-after may not be what she envisioned. Crossing the Line is a standalone Romantic Suspense / Mystery novel with a guaranteed HEA and no cliffhangers. Mature readers only. Adults 18+

Disclaimer: I received this book free from the publisher in exchange for an honest review, but it does not influence my opinion of the book nor the contents of this review in any way.

I was first intrigued by Crossing the Line by the blurb. I love dark romances, and haven’t been reading them of late, so this one really caught me.  He’s a killer (and a bit of a stalker), obsessed with a girl across the street. Sounds promising, right?

There was just… nothing to like. The main character was more like a feather, subject to flitting around by whatever outside forces were pushing her one direction or the other. She seemed to have no personality of her own, and just did whatever the other characters told her to do. She had almost no personality and honestly felt like a doll that just flops around.

Hunter, the other main character, had a little bit more going for him, at least. He was supposed to be this badass assassin/spy, but the heroine literally recognizes him because she saw his tattoo. Like what kind of assassin kills someone and lets his tattoo show. Like uhhh. Wore a ski mask and gloves but forgot to wear sleeves to cover the forearm tattoo. uh huh. That’s the highlight of a true good assassin. It not like she spent a whole three chapters building him up as this #1 Assassin Badass who was Untouchable.

“I don’t want your time here to be terrible. I’m trying to make you as comfortable as I can until you go  home.”

In a bit of a backstory… Addy sees a crime (killing) she shouldn’t have seen, and is put in Witness Protection Program. But really she saw Hunter, the guy who’s been trying to figure out a way to approach her and introduce himself since she moved in, kill someone. So he tracks her down in the witness protection program and asks her out there. After two dates (where she honestly doesn’t seem to like him that much), she sees his tattoo and recognizes him as the killer she’s attempting to hide from.  So he kidnaps her and takes her to his cottage in the woods. A real Beauty-and-the-Beast scenario here.

It read like a really bad fanfiction, and I really didn’t enjoy this one. Not only was the main guy a big flop, but the main girl was a complete idiot. She spends two days in witness protection program, and then in a fit of loneliness, tells a guy who she’d just met online that she WAS in the program. Then talks to him on the phone. Uhhhhh… that’s all mighty suspicious. The toe, despite having zero chemistry and her having not-so-much interest in him while they were “dating” before he kidnapped her, fell in love fast once in the cabin. It was like somebody floored the accelerator, and they were at the “Love you’s” and her wishing she could be kidnapped forever. Ahhh… okay.

The whole Stockholm syndrome plot device / Beauty and the Beast retelling thing has been done time and time again, and done well! Unfortunately, this one was not for me and I will not be continuing the series.

Thank you Enticing Journey Promotions for the title, and for the work you do 😄

* Note, these posts are not sponsored by Amazon in any way, other than I use Amazon Affiliate links, whereby I get a kickback of any book purchases any links of mine you click, at no extra cost to you.

Other reads you may enjoy… 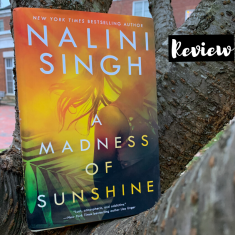 Have you read any Dark Romances you enjoyed lately? What are some of your favorite hate-to-lovers romances? Let me know in the comments below, I’d love to hear from you!